A registry is a service for storing and accessing Docker images. Docker Hub and Docker Store are the best-known hosted registries, which you can use to store public and private images. You can also run your own registry using the open-source Docker Registry, which is a Go application in a Alpine Linux container.

What You Will Learn

You’ll learn how to:

Note. The open-source registry does not have a Web UI, so there’s no interface like Docker Hub or Docker Store. Instead there is a REST API you can use to query the registry. For a local registry which has a Web UI and role-based access control, Docker, Inc. has the Trusted Registry product.

You’ll need Docker running on in this tutorial, or on a Linux machine and be familiar with the key Docker concepts, and with Docker volumes:

There are several ways to run a registry container. The simplest is to run an insecure registry over HTTP, but for that we need to configure Docker to explicitly allow insecure access to the registry.

Docker expects all registries to run on HTTPS. The next section of this lab will introduce a secure version of our registry container, but for this part of the tutorial we will run a version on HTTP. When registering a image, Docker returns an error message like this:

** Running on your own Linux machine instead of in this browser window ** Edit or create /etc/docker/docker file:

Close and save the file, then restart the docker daemon.

** If you’re running on your own Mac or Windows machine instead of in this browser window ** In Docker for Mac, the Preferences menu lets you set the address for an insecure registry under the Daemon panel: 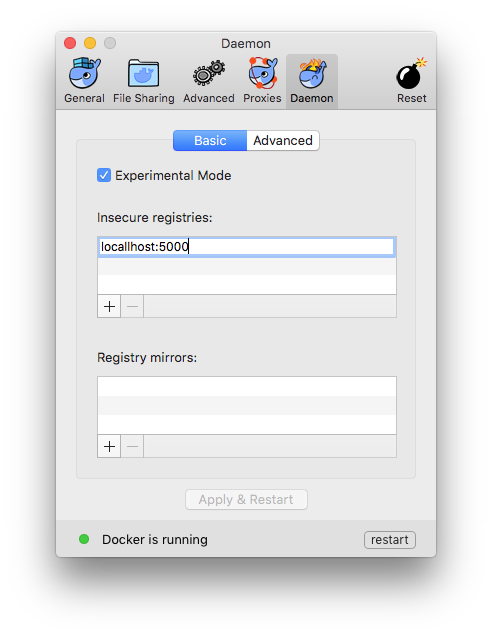 In Docker for Windows, the Settings menu lets you set the address for an insecure registry under the Daemon panel: 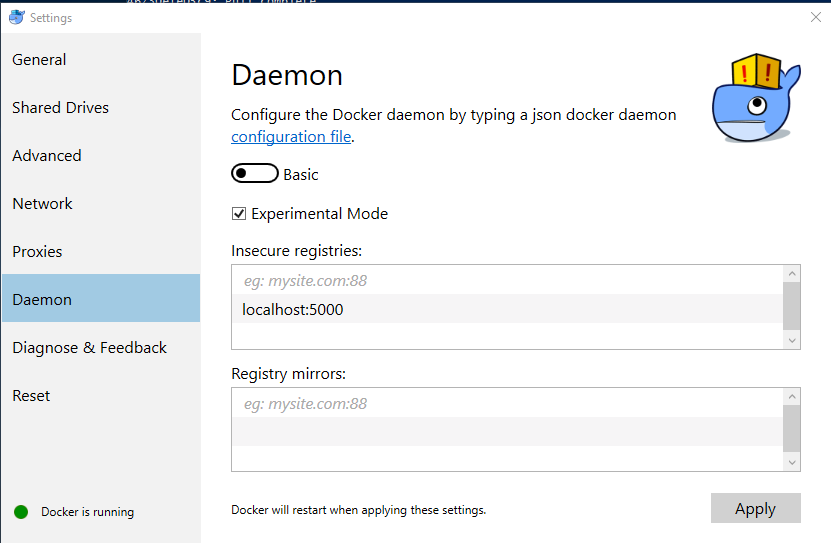 First we’ll test that the registry image is working correctly, by running it without any special configuration:

Typically we work with images from Docker Store, which is the default registry for Docker. Commands using just the image repository name work fine, like this:

hello-world is the repository name, which we are using as a short form of the full image name. The full name is docker.io/hello-world:latest. That breaks down into three parts:

Pushing and Pulling from the Local Registry

Docker uses the hostname from the full image name to determine which registry to use. We can build images and include the local registry hostname in the image tag, or use the docker tag command to add a new tag to an existing image.

These commands pull a public image from Docker Store, tag it for use in the private registry with the full name 127.0.0.1:5000/hello-world, and then push it to the registry:

When you push the image to your local registry, you’ll see similar output to when you push a public image to the Hub:

On your machine, you can remove the new image tag and the original image, and pull it again from the local registry to verify it was correctly stored:

That exercise shows the registry works correctly, but at the moment it’s not very useful because all the image data is stored in the container’s writable storage area, which will be lost when the container is removed. To store the data outside of the container, we need to mount a host directory when we start the container.

Remove the existing registry container by removing the container which holds the storage layer. Any images pushed will be deleted:

Tag and push the container with the new IP address of the registry.

Repeating the previous docker push command uploads an image to the registry container, and the layers will be stored in the container’s /var/lib/registry directory, which is actually mapped to the $(pwd)/registry-data directory on your machine. Storing data outside of the container means we can build a new version of the registry image and replace the old container with a new one using the same host mapping - so the new registry container has all the images stored by the previous container.

Using an insecure registry isn’t practical in multi-user scenarios. Effectively there’s no security so anyone can push and pull images if they know the registry hostname. The registry server supports authentication, but only over a secure SSL connection. We’ll run a secure version of the registry server in a container next.