This lab walks through the evolution of a simple Node.js bulletin board application, running on Docker. You’ll start with a simple app that uses hard-coded data, then add SQL Server for persistent storage, and a proxy to improve web performance.

You’ll learn about packaging applications in Docker images, running distributed applications across multiple containers, and adding instrumentation to your containers so you can see the health of your application. You’ll use the Docker command line, Docker Compose and Docker swarm for running the app.

Clone the source code from GitHub

Use the following command to clone the application source code from GitHub (you can click the command or manually type it). This will make a copy of the lab’s repo in a new sub-directory called node-bulletin-board.

And browse to the source code folder:

Save your Docker ID

You need a Docker ID to push your images to Docker Hub. If you don’t have one, create a free Docker ID at Docker Hub.

Now save your Docker ID in an environment variable - you need to type this command manually with your own Docker ID:

Be sure to use your own Docker ID. Mine is sixeyed, so the command I run is export dockerId='sixeyed'.

Check your Docker ID gets displayed when you read the variable:

Task 1: Run v1 of the app in a container

The first version of the application uses a single container, running the Node.js application, and the data is only stored on the client’s browser.

Now build the Docker image, which uses this Dockerfile to package the source code on top of the official Node.js image:

When that completes you will have version 1 of the app in an image stored locally. Run a container from that image to start the app:

You’ll see the bulletin board application, and you can add and remove events: 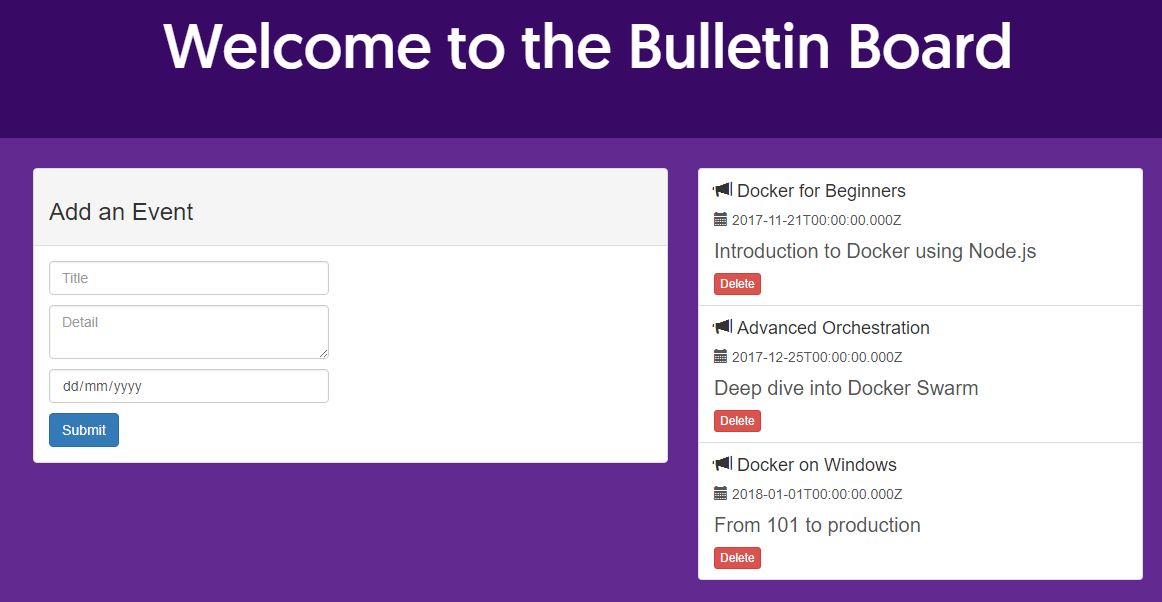 If you make some changes and refresh the browser, you’ll see your changes get lost. That’s because the events are only stored in memory on the client.

In the next step you’ll fix that.

Storing data in client memory is only good for proof-of-concept applications. In this step you’ll build and deploy version 2 of the app, which uses a SQL Server database to store the events.

Now clear up all the containers from the previous part:

You’ll use Docker Compose to build and run the application. The compose file specifies the database and application containers to run, and how to configure them.

When that completes, you’ll have two Docker images:

You can start the whole app with Docker Compose:

You’ll see compose starts the database first, because it’s specified as a dependency for the application container. Then it starts the app container.

If you list all containers, you’ll see there are two instances of the app container. One container started before the database was ready, so it failed - and then Docker Compose started a replacement container, which did connect to the database.

You’ll see it’s the same user interface, but now you can add and delete events and when you refresh the page they’re still there. The data is persisted in SQL Server.

The SQL Server database is not publicly available. In the docker-compose.yml file, the web container, the port 8080 is published so you can send traffic in, but no ports are published for the database. It’s only available to other containers and to Docker.

Swarm mode lets you join several Docker servers together and treat them as a single unit. You deploy your app as services to the swarm, and Docker runs containers across all the servers.

You can run multiple instances of a container to deal with scale, and if a server goes down and you lose containers, Docker starts replacement containers on other servers.

First clear down all the containers from part 2:

This creates a single-node swarm. The output of the command shows you how to join other Docker servers to the swarm - all you need are more servers running Docker in the same network. You can scale Docker swarm up to hundreds of nodes.

And build the application with Docker Compose:

Version 3 has the same source code, but the Dockerfile for v3 of the the web app includes a HEALTHCHECK instruction. That tells Docker how to test if the application is healthy, and unhealthy containers are stopped and replaced with new ones.

You use the same Docker Compose file format to deploy in swarm mode, and there are some additional options available. Deploy version 3 of the app using the docker-stack.yml file:

A stack is a way to group many services together, so you can manage them as one unit. You can see the services in the stack, which tells you if the application is up:

You’ll see the application behaviour is exactly the same - containers are running from the same Docker images, but now they’re being scheduled by Docker swarm.

Docker swarm also supports rolling updates for applications running as stacks. In the next part you’ll add more functionality to the app, by running a web proxy.

Node.js is a good server platform, but it’s easy to improve performance by putting a reverse proxy in front of the Node.js application. The proxy is the public entrypoint to the app, and it handles requests from users.

Nginx is a popular open source web server which you can easily configure as a reverse proxy. The Nginx configuration in this part makes use of browser and server caching, which reduces the load on the web application and improves performance.

Switch to the v4 code branch:

And use Docker Compose to build the application:

Now you have v4 Docker images for all the application parts, you can upgrade the running stack using the new docker-stack.yml file:

Version 4 adds a proxy server to the stack which publishes port 80, so now you can browse to the app on the standard HTTP port:

The web application looks the same, but behind the scenes all the hard work is being done by the Nginx proxy. You can open developer tools on your browser and inspect the network responses - Nginx has added browser caching hints, and it’s also using a local cache to reduce traffic to the Node.js app.

There are also several instances of the proxy container running - Docker swarm load-balances incoming requests between those containers. If you had multiple servers in the swarm, you would be able to scale up to handle your incoming workload.

In the final part you’ll add monitoring to the application, so you can see what the Node.js container is doing.

Docker swarm makes it super easy to scale containers, but before you go to production witrh a Dockerized application, you’ll want monitoring in place so you can see what all those containers are doing.

Two open-source technologies are very popular in the Docker ecosystem for monitoring containers. Prometheus is an instrumentation server that collects and stores metrics from your containers, and Grafana is an analytics UI that plugs into Prometheus to show dashboards.

In this part you’ll add Prometheus and Grafana to your application.

Now build the application, which will build images from the Prometheus Dockerfile and the Grafana Dockerfile:

You have v5 images for all the application components now. Upgrade the stack to the v5 docker-stack.yml file:

The UX is the same, but now the Prometheus container is scraping metrics from the Node.js container, every 5 seconds.

To see the application metrics in Grafana, you need to configure the dashboard:

Log in to Grafana with the credentials admin / admin.

Add a new data source with the following details:

You’ll now see the application dashboard - send some load into the app by refreshing the browser, and the graphs will be populated:

You can easily remove the whole application by removing the stack:

And you can leave swarm mode to return to a single-server Docker host:

Thanks for completing the Node.js and SQL Server lab! You’ve learned how to build and run applications with Docker and Docker Compose, how to achieve high availability with Docker Swarm and how to get your application production ready by adding a proxy and a metrics dashboard.

The Play with Docker Training site is always on, and there are plenty more labs you can try at home.